skip to main | skip to sidebar

First our gal J. Manning peaced out to become the editor of Tasting Table. Now comes word food editor Ashley Primis is saying bon voyage to the regional mag for the Director of Special Projects position at the recently James Beard-nom’ed Starr Restaurant Organization. Successors for Manning and Primis have yet to be named. Food writers, start your resumes. 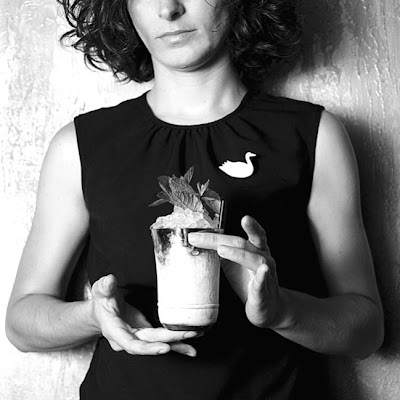 Cheers to Al Sotack, head bartender at Franklin Mortgage & Investment Co., for dropping us a line with the speakeasy's new 34-drink spring menu. "Containing not only our take on nine classic cocktails, our Spring Menu features twenty-five staff contributions, undoubtedly representing the style and personality of our barkeeps more than either previous." Persephone, named for the Greek queen of the underworld, is looking to gain status as our regular drink this season. According to legend, the kidnapped maiden was permitted an annual springtime furlough from Hades, and upon her return, the earth would flower and fruit for six months. (Lesson courtesy of Percy Jackson and the Lightning Thief.) Made with white rum, fresh grapefruit and lime juices, grapefruit bitters and house-made grenadine, Franklin's refreshing Persephone is exactly the kind of tonic to help shake off half a year of hibernation. 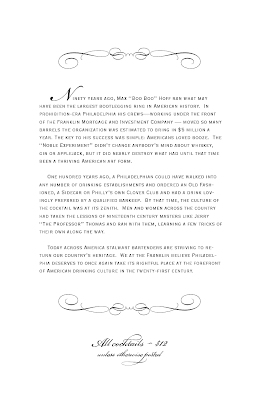 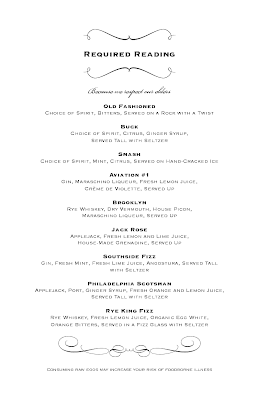 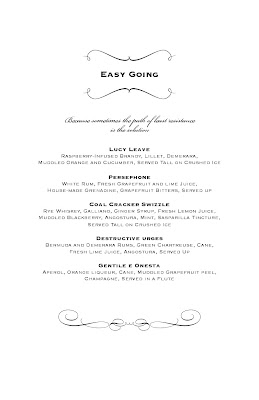 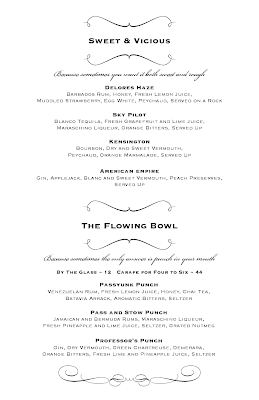 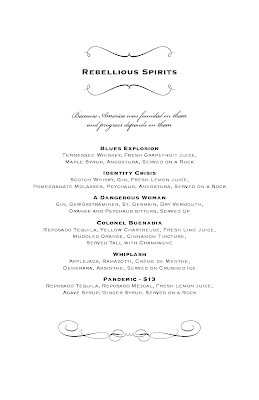 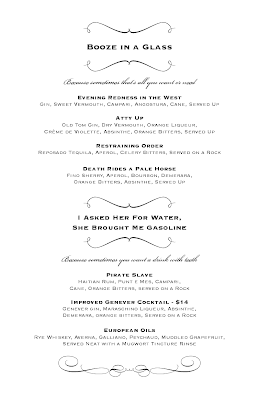 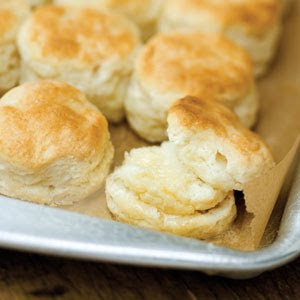 We've been M.I.A. more than minute, but this post brings us back with a bang. Carla Goncalves, better half of the twosome behind KooZeeDoo, shared with us the secret formula for her heavenly buttermilk biscuits, named "Best Back from the Dead Baked Good" in Philly Weekly's Better Than Best issue. The biscuits pictured above are not hers; you have to go to KooZeeDoo at lunch to get them, or now, just bake up a batch of your own.

You'll have to wait till next week for our official review of Mike Stollenwerk's sequel to his maddeningly popular Little Fish, but for now we can tell you the restaurant is set to begin brunch on January 31st. Surprisingly--and very unlike the dinner menu at fish--the carte du jour isn't nearly as seafood-dominated. And though we'll say yes please to baked eggs with lobster and uni emulsion, we're even more jazzed about french toast filled with foie gras, pork belly over grits and duck eggs benedict gilded in duck fat hollandaise. Sunday the 31st also marks Stollenwerk's reprisal of Little Fish's famous $28 five-course pre-fixe. Given that fish, while more than double the size of Little Fish, still only seats 47 including the bar, reservations will likely be just as elusive. Godspeed.
fish
Brunch Menu
Smoked Salmon Hash
Fried egg, celery leaf 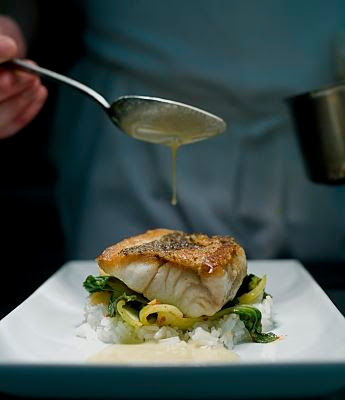 January is shaping up to be the month of the pre-fixe menu. Consider this dealsky of a dinner menu recently slipped into the check presenter at newish Portuguese kitchen Koo Zee Doo: a “Regional Taste of Portugal” from chef/owner David Gilberg featuring five courses for $75—per couple! Do the math, kids; that’s only $38.50 per person, available every night from January 15th through February 15th.

Also just got word of Snackbar’s Restaurant Week counter-programming, a “Three Years, Three Bells, Three Courses, $30” menu that, if you so desired, could culminate with that succulent-looking red snapper glossed with miso beurre blanc pictured above. The whole menu is eligable, right down to the soft pretzel bread pudding with fleur de sel caramel and pretzel praline. Chef John Taus will be running the deal from Sunday, January 24th to Friday, the 29th. And on Tuesdays and Sundays through February at Sonata, chef/owner Mark Tropea is doing a build-your-own tasting that gives diners access to most of the restaurant’s menu. It’s $31 for app, entrée, dessert. Check the website for the full menu.

New Chef & Menu For The Institute

Choosing only 10 dishes for the Best of 2009 story in this week’s PW was about as easy a decision as choosing a movie to watch OnDemand. So without further ado, the runners-up.

Jerk Chicken, Irie Caribbean Grill / Never have I had jerk so authentically spicy. That is came from a camo-green food truck (which has since disappeared from 24th & Passyunk) made it that much better. (January)

Burger, Prohibition Taproom / The beef blend for this bad-boy comes from Esposito’s and is top-secret. Just be thankful you’re in on its bacon-sautéed leeks-and-gorgonzola-crowned existence. (February)

Chifa Chicken / Thanks to Art Etchells of Foobooz for just reminding is of the bangin’ bird prepared Peking-style at Chifa. (April)

Kebabs, S&H Kebab House / Meat + metal rods + smoking coals. With native Turks doing the cooking, how could it not be amazing? (May)

Domingo Arepa, Sazon / The fillings, in this case cuminy black beans and queso, are almost extraneous beings Judy Suzarra-Campbell’s pillowy white-corn pockets are like a trip to Caracas. (July)

Lemon-Braised Short Ribs, Noble / Not a great experience at Noble, but there was no denying the excellence of former chef Steve Cameron’s surprisingly summery short ribs over sweet-and-savory onion rice pudding. (July)

Nachos Encarnacion, Distrito / We’ve said it before and we’ll say it again. Garces’s cast-iron skillet-full nachos flecked with charred ends of skirt steak and showered in cilantro sprouts are the best in town.

Butternut Squash Puree, Marigold Kitchen / The banana bubbles could have gone so, so wrong atop this voluptuous soup, but new chef Rob Halpern knows his flavors.

Avgolemono Soup, Kuzina by Sofia / Great Greek in a Cherry Hill strip-mall? Why not. Tender short-grain white rice is like buried treasure at the bottom of this cup, which brims with a simultaneously refreshing and warming chicken broth fortified with beaten egg and lemon.

Soft Pretzels, 10 Arts / We suspect the tossing it brown butter elevates homegirl Jen C.’s pretzel bites above the others in town. 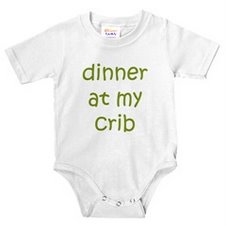 When one of our editors had a baby boy last year, we went forth into the hellish depths of children's clothing stores searching like mad for an appropriate present. It was terrifying. Lots screaming. Lots of tears. And that was just us, not the kids. 2T, 3T, 18-25.67-repeating-months. We felt like we were back in math class trying to find some cool apparel for this foodie in training. We came up empty-handed and were forced to create our own gift. Thus, Sashimi Baby was born, tee shirts, bibs, and onesies for the ubran baby with discriminating taste. Is your Beer Snob in Traning's bottle filled with Sly Fox formula? Or do you have a brat that's prone to Tempura Tantrums? Which side of the foie gras debate do your progeny stand on? Alphabet bibs teach babes their ABCs according to your favorite gourmet ingredients--A for arugula, B for branzino, C for chorizo--so that when the time comes, they're be well equipped to order for themselves at Amada and Lacroix. 100% cotton. Available from 6 months to 24 months. Quick shipping. Perfect for a present or for your own adorable little monster.